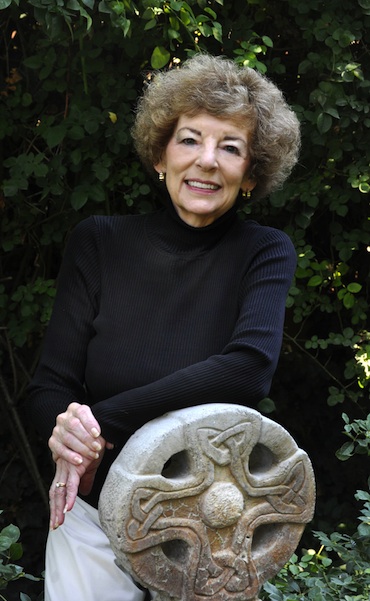 Meticulously researched, entertaining novels of romance, history and mystery in an engaging you-are-there style that lets you live the history.

The Celtic Cross Series is a sweeping saga of the history of Scotland and Ireland. Mary and Gareth, young people trying to understand their modern world, delve into the past to find meaning for today.

Part I, Scotland: The Struggle for A Nation, is told in 4 epochs from St. Columba bringing the light of Christianity to his adopted land through the establishment of Scotland as a nation under the valiant William Wallace and Robert the Bruce.

Part II, Ireland: The Pursuit of Peace, finds Mary and Gareth in Northern Ireland, working for peace during the Troubles. In the final 6 epochs of the series they experience the pain and grandeur of Ireland's turbulent history from the planting of Ulster through the Cromwellian war, The Battle of the Boyne, the union of parliaments, the great famine, and on to a vision of true peace in our own time. 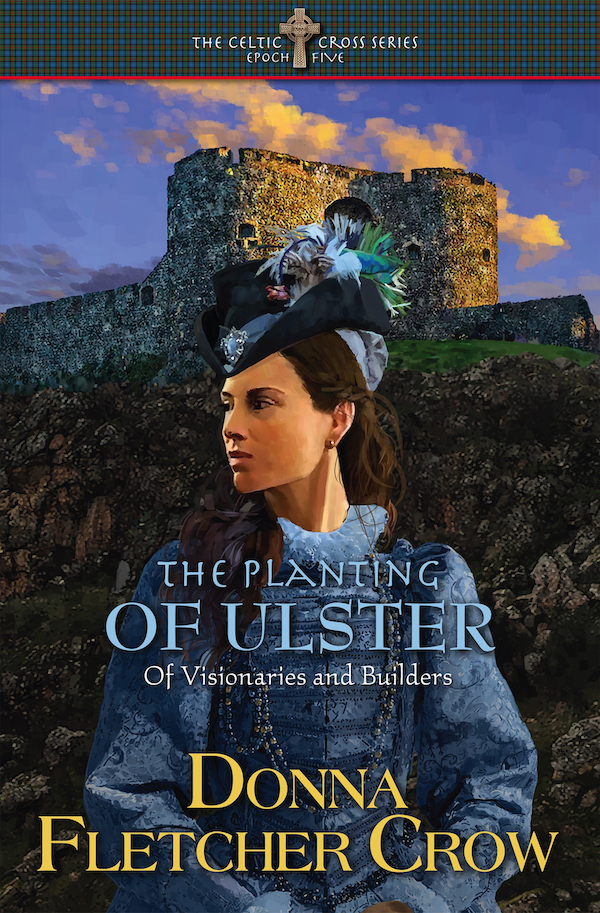 Epoch 5 The Planting of Ulster, Of Visionaries and Builders

Mary returns to Scotland in the summer of 1996, her head brimming with wedding plans. But Gareth has quite different ideas. He is off to work in a reconciliation center in Northern Ireland, made possible by the recent ceasefire in the Troubles. Filled with trepidation, Mary agrees to go with him. But what if those mad Irish start throwing bombs at each other again?

Desiring to understand the history of the conflicts that have torn this beautiful island for centuries, Mary turns to their friend’s family journals.

In 1610, Calum Lanark, refused the hand of his beloved Deirdre, joins the Scots settlers seeking to make a new life in the Ulster Plantation–where Lady Montgomery introduces planting potatoes into Irish agriculture. Amid new friends and bountiful opportunities, Calum seeks a future where he and Deirdre can live. Until disastrous strife destroys all his efforts.

Glastonbury: The Novel of Christian England 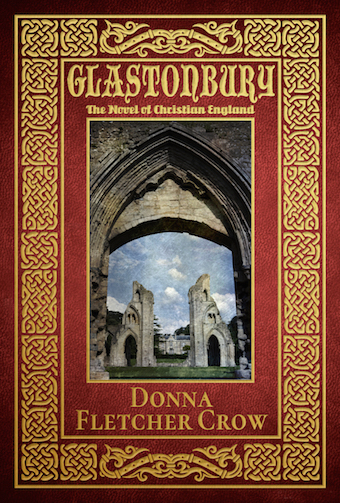 An epic search for the Holy Grail

Witness 1,500 years of Christianity in the face of war and chaos. The last Glastonbury monk delves through myth, legend, and recorded history on an heroic quest for truth and meaning while Glastonbury Abbey stands sentinel, a beacon of hope and light for those seeking meaning for today.

"An almost perfect blend of history, mythology, and excellent storytelling."

"I am looking forward to going back to the beginning of the book and rereading the entire thing again."

"If I ever need to 'lose' myself to this world in a book, I break out Glastonbury...the solid, believable characters, the times they lived in, the troubles, heartache and triumphs they experience along the way......just....read it."

"An epic book that overcomes the reader with tears of joy and of despair."

"What a work! Every reader can be enveloped in the sheer scope and quality, every historian be constantly nodding at the precise detail and accuracy, and every Christian can rejoice in the fullness of scripture. For me it is simply beyond descriptive praise. I would urge all who value truth to treat themselves to a feast."

More About Glastonbury: The Novel of Christian England >> 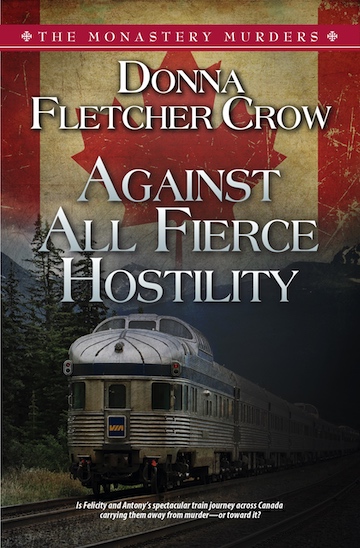 The Monastery Murders moves to Canada when Antony is invited to lecture on the British saints who inspired the founding of Toronto and Felicity couriers an ancient manuscript connected with Saint Patrick to monasteries in Montreal and Vancouver. A spectacular train journey across the breadth of the continent carries them even further away from the murder Felicity witnessed in England. Or does it?

Atmospheric contemporary crimes with their roots buried deep in the middle ages.

"Donna Fletcher Crow has created her own niche within the genre of clerical mysteries." - Kate Charles

More About The Monastery Murders >> 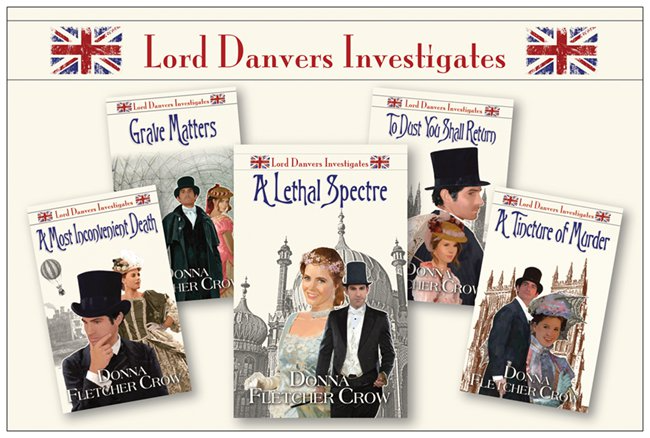 The elegance of Victorian aristocracy set against the dark underworld of crime.

"Interesting characters and vivid details drawn from impeccable research. Victorian Britain comes to life, thanks to period dialogue that rings all the right notes and a mystery that keeps you guessing until the very last page. Delightful!"
- Liz Curtis Higgs, New York Times best-selling author

"A stunning contrast between the dramas and machinations of fashionable London life and the unfurling of an unthinkable tragedy. A story of lights and shadows, all impeccably well researched and realised."
- Linda Stratmann, author of The Frances Doughty Mysteries

"The author's descriptive prose is excellent, and her grasp of history and her ability to put the reader into history is remarkable."
- Amazon customer

More About The Lord Danvers Series >> 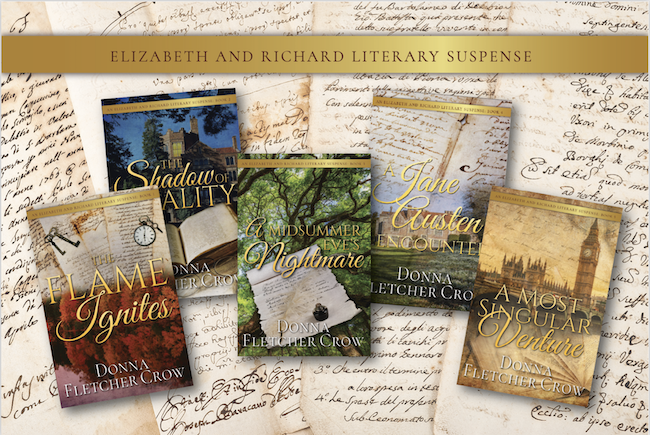 Book 1: The Flame Ignites
Elizabeth and Richard strike sparks on their first meeting in a New England autumn

Book 2: The Shadow of Reality
Elizabeth and Richard at a Dorothy L Sayers mystery week high in the Rocky Mountains

Book 3: A Midsummer Eve's Nightmare
Elizabeth and Richard honeymoon at a Shakespeare Festival in Ashland, Oregon

Book 5: A Most Singular Venture
Murder in Jane Austen's London

"Charming page-turners that will keep readers on edge to the very end." - Kathi Macias, People of The Book

More About The Elizabeth and Richard Mysteries >>

Where There Is Love

The enduring legacy of love and faith.

Stories of real people and stirring events to inspire us for our own day.

"A fine novel...Of course, you must have this book!" - Librarian's World

More About Where There Is Love >> 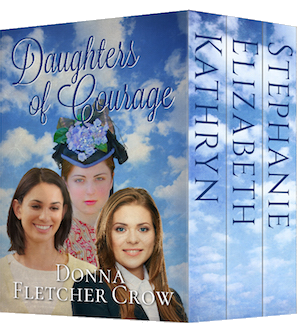 Through every generation, America's women have exhibited courage, spirit and faith. This sweeping family saga will help today's women find inspiration to triumph in the challenges we all face.

"It's rare to find novels that combine a strong Christian ethic with such compelling storytelling. Because these are real people and real events, the experiences of faith challenged and faith triumphant are all the more meaningful. I hope that Donna Fletcher Crow's loving testament to her grandmother and mother and to the brave men and women who shaped our country will touch you as much as it did me."
--Lenore Person, Guideposts Books

More About Daughters of Courage >>

Just in time for the holidays, personalized autographs are now available for print and ebooks. Visit the Authorgraph website to order. Free! If you want an autograph for an edition not shown, contact Donna and she will happily add it.

Jane Austen recalls her time in Portsmouth, and the importance of the Royal Navy to her family, their letters, and her novels. https://soundcloud.com/donna-fletcher-crow